Early experience with FORMULA-216TM shows it may be delivering on its promise to raise internal levels of vitamin C without dietary or supplemental intake of vitamin C.

Given that vitamin C is rapidly excreted in urine flow, a reagent test strip can be used to measure internal concentrations of vitamin C in a urine sample. The five colors of the test strip indicate a doubling of vitamin C levels ranging from near zero to 100 milligrams per deciliter of urine, as shown below

The following graphic shows results of taking FORMULA-216 TM by a volunteer. Given that FORMULA-216TM actually supplies 275 milligrams of supplemental vitamin C, a rapid rise in blood and urine levels is expected as well as a rapid return to near-zero urine levels within 2-4 hours of intake.

As can be visualized in the following graphic, the volunteer took FORMULA-216TM at 11:00 PM on a Tuesday evening and woke up the next morning with a “20” reading on the urine test strip 8.5 hours later (7:30 AM) which was unusually maintained for another 12 hours (7:30 PM.)

Then alcohol was consumed at 7:30 PM to intentionally deplete vitamin C which 42 minutes later (8:12 PM) was still measured at “20” mg per deciliter of urine.

Again, FORMULA-216TM was taken at 11:00 PM that Wednesday evening prior to bedtime and 8.5 hours later (7:30 AM) and 9.5 hours later (8:30 AM after morning urination) blood levels unexpectedly rose to maximum 100 mg/deciliter of urine and remained that high till after 6:00 PM that day. After 12 hours and fifteen minutes passed since taking FORMULA-216TM the urine level was still at “20.” 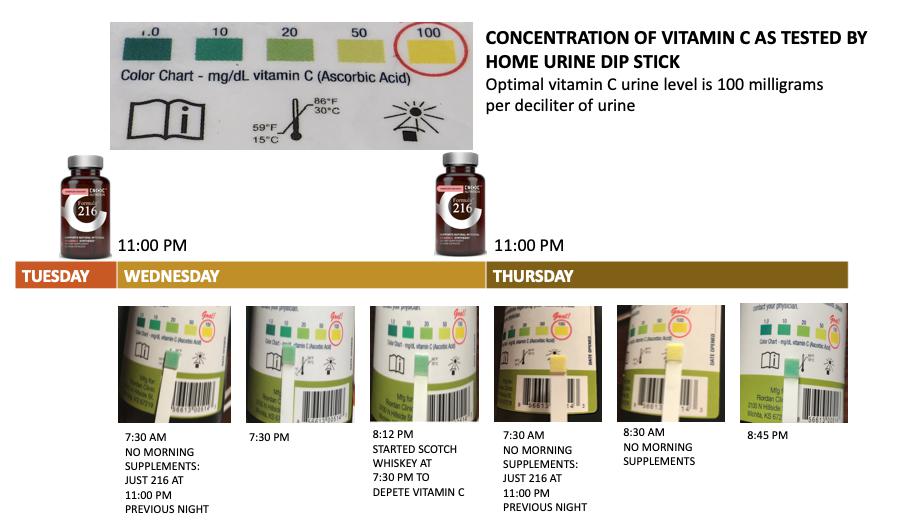 By comparison, in an animal that normally does not make its own vitamin C 24/7 and does not increase its internal synthesis during times of increased oxidative stress, such as a guinea pig that has the same gene mutation as humans, it would be anticipated that any acute oxidative stress coming from any toxin (such as the presence of a substantial amount of alcohol) or body-wide infection would be expected to immediately DEPLETE circulating vitamin C levels, resulting in LESS TO NO spillage of vitamin C in the urine. Instead, this volunteer drank a large amount of alcohol in the form of whiskey and a prompt, sustained INCREASE in urine vitamin C spillage was seen, the exact OPPOSITE of what should be typically seen. This would be the anticipated vitamin C synthesis response that is expected in a VITAMIN C-SYNTHESIZING animal.

The FORMULA-216TM dietary supplement contains an extract from olives that was shown in a prior published study to double blood levels of vitamin C without dietary or supplemental intake of vitamin C.

Blood tests will now be conducted to further correlate urine with blood levels of vitamin C. ####