Maybe you are not familiar with the vitamin C story and the predicament humans face because of a gene mutation that occurred long ago in human history that resulted in a dysfunctional GULO gene.

The GULO gene produces the gulonolactone oxidase enzyme, the last of four enzymes required to convert blood sugar as it passes through the liver to ascorbate – vitamin C.
Most other animals endogenously produce vitamin C. Guinea pigs, fruit bats, primate monkeys, a Japanese killfish and human suffer the same plight as homo sapiens – they are missing an enzyme (gulonolactone oxidase) that converts blood sugar (glucose from the liver, sucrose and fructose from the diet) to ascorbate as blood passes through the liver.
Legendary biochemist Irwin Stone said this in 1979:

“This genetic approach, in which the gene is repaired or replaced so it will be capable of directing the synthesis of the active enzyme (gulonolactone oxidase)… would be a convenient solution to the problem, but the present ‘state of the art’ in genetic engineering is not capable of doing this. Perhaps another 50 years will see this accomplished. Humans would then be able to perform the endogenous synthesis of ascorbate, just like the other mammals.”

Years ago researchers in Japan injected a functioning GULO gene into fish eggs and they hatched to produce vitamin C-secreting killfish. That could be done in vitro in human eggs and the next offspring of females would produce vitamin C again. But this would have no impact on our present generation.
There has been no impetus to remedy this universal gene mutation.

Now suddenly and unexpectedly a small human study reveals a natural molecule derived from olives can read-through the mutated GULO gene to produce the enzyme once again. Blood levels of vitamin C doubled from 23 to 47 micromole/blood sample (Source: Redox Biology). It was a very historic moment. Whatever foot dragging modern medicine has practiced has been overcome by a chance discovery.

The published study does not reveal the mechanism but a biological phenomenon known as STOP CODON READTHROUGH is the only plausible one. Here is how it works. This calls for an explanation.

The DNA ladder (seen below) is organized in coiled strands, wrapped around a ball called a histone body (below in grey). Further uncoiling of the DNA ladder we find the rungs (steps) comprised of nucleotides (adenine, cytosine, guanine, thymine or A, C, G, T). 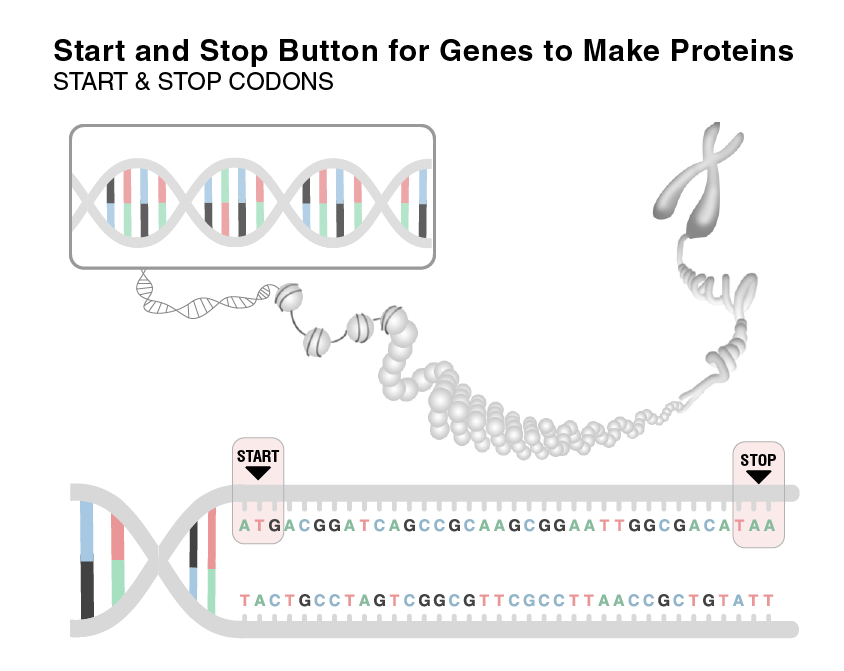 Certain small natural molecules called polyphenols can enter cells and the cell nucleus to influence genetic machinery and the start and stop codons.

As you examine the above illustration you see in the unraveled DNA a sequence there is a sequence of three nucleotides (ATG and TAA) that signal a gene to start making proteins (START CODON) and to stop making them (STOP CODON). CODONs are signals like street traffic signals that say when to stop or go.

In the above illustration, the top graphic shows the gulonolactone oxidase enzyme is fully formed and acts to convert sugar to vitamin C in the liver.

In the middle illustration you can see a PREMATURE STOP CODON that only produces an incomplete protein (enzyme) which is disposed of. No vitamin C production.

In the bottom graphic you see a small molecule provided in FORMULA-216™ goes through the PREMATURE STOP CODON to produce a complete protein and the GULO gene resumes production of gulonolactone oxidase which facilitates vitamin C synthesis (conversion of blood sugar to ascorbate).

If you understand this give yourself a junior geneticist diploma.

Almost 40 years ago biochemist Irwin Stone surmised the endogenous resumption of vitamin C synthesis would have a profound effect upon human healthspan and lifespan. However, because government regulators censor any comments about nutraceuticals like Formula-216 adding years to life, all that can be said at this time is that was confined to the animal lab.

In that regard, researchers in Canada have demonstrated in laboratory animals a profound increase in healthspan and lifespan when optimal vitamin C levels were achieved via dietary supplementation. I refer readers to that report in the Journal of Orthomolecular Medicine.

Yes, if you are reading this report carefully, health seekers can take 500 milligram vitamin C pills every 4-6 waking hours to mimic the effect and achieve optimal blood levels of ascorbate.
However, the need for vitamin C is not static, it is quite dynamic. Emotional or physical stress may activate adrenal stress hormones (adrenalin) that in turn release sugar stores that will be converted to vitamin C in an animal or human with a functioning GULO gene.

Unfortunately, as explained above, the GULO gene is universally broken and no endogenous vitamin C synthesis takes place in humans. However, when a small natural molecule from olives “reads through” the PREMATURE STOP CODON, the enzyme is produced and vitamin C is synthesized. (See below)

Because of variable levels of stress throughout the day, we have no way of assessing how much supplemental oral vitamin C is needed.

The lesson to learn here is that humanity lost its ability to deal with stress when a gene mutation universally affected the entire human population on earth. This had to happen when there was a bottleneck in the number of people living at the time.

Of anecdotal interest, ancient historical records allude to a worldwide flood when there were only eight people who survived and they intermarried, a practice that can induce gene mutations.
The restoration of the GULO gene would facilitate greater production of vitamin C as stress levels release more sugar that in turn converts to more ascorbate (vitamin C) synthesis in the liver. So FORMULA-216™ presumably does something vitamin C supplementation cannot do – produce more vitamin C on an as needed basis as stress levels rise.

Vitamin C has been successfully restored as a hormone in the human body. It took four weeks for this conversion to take place. Researchers say it takes longer for some people to re-program their GULO gene and begin producing vitamin C internally again.

With FORMULA-216™ you don’t have to remember to take vitamin C pills 4-5 times a day.

Pinch yourself. This is a very special time to be alive. If what has been demonstrated in the animal lab can be extrapolated to humans, we are on the cusp of a major historical advancement in healthspan. Animals in the laboratory that were given vitamin C continually throughout the day lived most of their lives without evidence of aging – no wrinkles, no grey hair, no cataracts, no heart failure, no malignancies and no mental decline throughout most of their lives. For those individuals who fear living past the age of 100, more healthy years suggests less reticence to live long. Human healthspan is about to be dramatically prolonged which will save Medicare & Social Security from insolvency. I’m sure this unforeseen development will catch humanity off guard.
You will surely have many questions on your mind. Please visit the Q & A section of the ENCODE NUTRITION website or forward your questions to me at info@encodenutrition.com